telegram
BY/RU
ENG
HOW THE ‘FEAR FACTOR’ AFFECTS POLITICAL SURVEYS IN BELARUS
Can results of independent studies be skewed by respondents’ fear of answering political questions.
Director of "Belarusian initiative" of Chatham House and founder of Center for New Ideas
Ryhor Astapenia
[ To all articles ]

Photo by Pavel Kritchko
Recently there has been increasing discussion of whether opinion polls in Belarus reflect reality. Mistrust of the authorities and their institutions makes the results of state polls unreliable in the eyes of Belarusians. While independent surveys have a more reliable reputation, some consider it impossible to conduct them in the current environment.

Moreover, some people think that even in properly conducted independent studies, results can be skewed by respondents’ fear of answering political questions.

In this chapter, an attempt will be made to assess to what degree fear influences the answers to certain questions. We used several different techniques in the study to stimulate respondents' sincerity and reduce anxiety.

Concerns about the effects of fear while taking a survey on political topics are justified:

About nine per cent of respondents stop doing the survey when they reach the question at the very beginning of the questionnaire: ‘Which position is closer to you?’ (Support for the protests, neutral, support for the current government). Some of the responses from respondents also speak of concern:

Respondents’ feedback after completing the survey:

According to Belarusians, other survey participants were honest in 69% of cases

It can be assumed that when answering the question, respondents proceeded from their own personal level of honesty.

Thus, it can be assumed that the share of insincere answers is too high to be ignored.
The share of those who voted for Sviatlana Tsikhanouskaya in the elections in 2020 was estimated using the unmatched count technique (UCT).

Respondents were asked to select the number of statements they agree with:

You will now be shown several statements. Please indicate the TOTAL NUMBER of statements that you believe to be true – i.e. a number from 0 to 5 (6). You don't need to specify which statements you agree with. If you agree with all five (six) statements, write 5 (6). If you only agree with one statement, write 1 (no matter which one it is), and so on.

Set of options for the first half of the sample:


Set of options for the second half of the sample includes all the statements above with one more option:
I voted for Sviatlana Tsikhanouskaya in the 2020 presidential elections 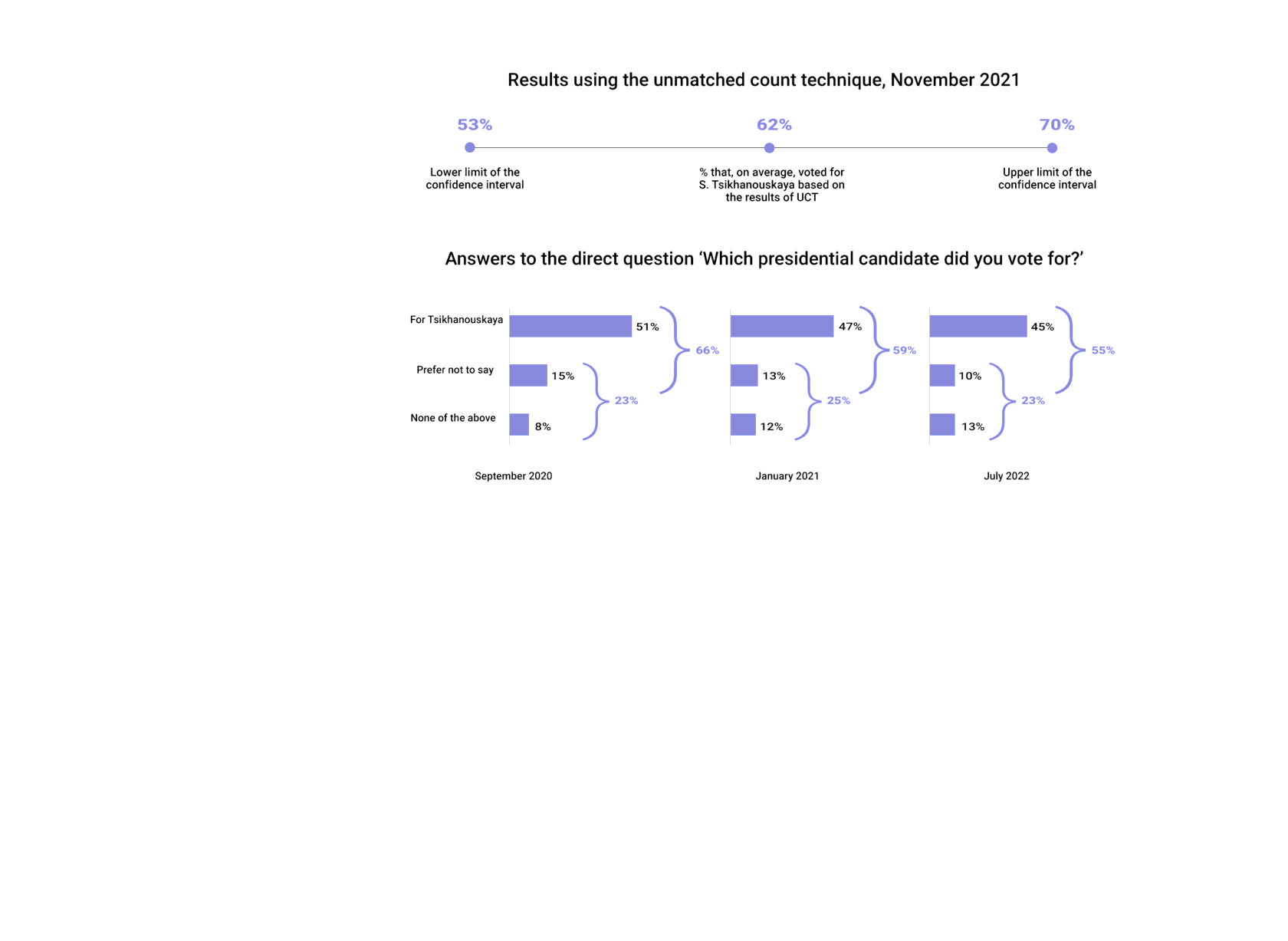 On average, 62% of urban Belarusians with internet access voted for S. Tsikhanouskaya.
With a 95% probability, the share of Tsikhanouskaya's supporters lies in the range from 53–70%.

The share of those who participated in the protests was assessed using the randomized response technique* (crosswise model). The respondents had to mentally answer two questions, one of which was neutral, and the other of which is sensitive:

Depending on whether the answers to these questions coincided, they then had to select the option “different” or “the same”;

There are 2 questions on the screen. Answer these questions in your head, and then compare if your answers are different or the same. If you gave the same answers to both questions (for example, both ‘yes’ or both ‘no’), select ‘the same’ option. If your answer to one of the questions is ‘yes’, but ‘no’ to the other, select the option ‘different’. 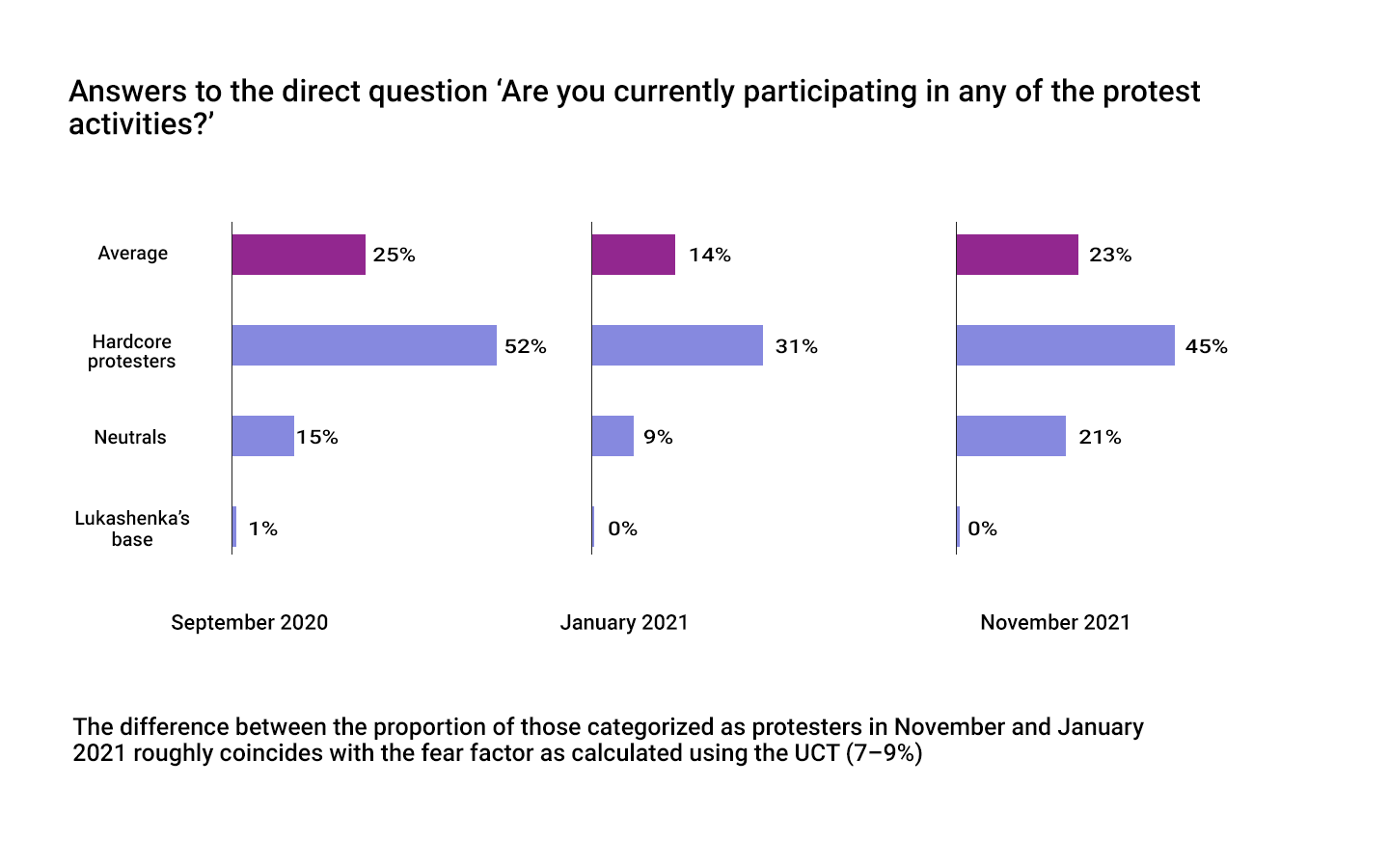 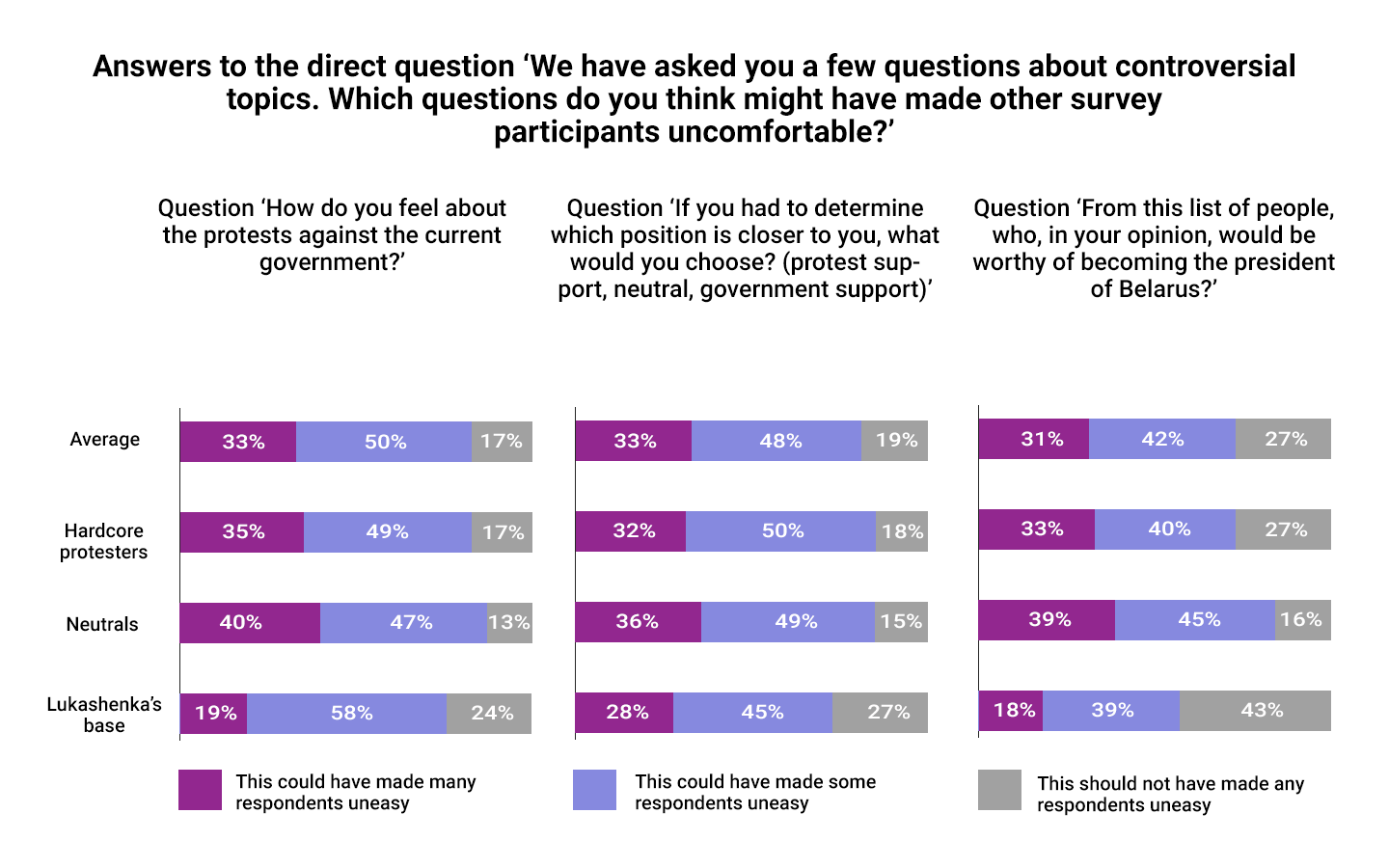 The fear factor is present in research on sociopolitical topics but it doesn't affect on the results significantly.

Read
Can results of independent studies be skewed by respondents’ fear of answering political questions.
HOW THE ‘FEAR FACTOR’ AFFECTS POLITICAL SURVEYS IN BELARUS
Ryhor Astapenia
Read
We tried to answer this question using data from new research by Chatham House.
On myths, tolerance, and social distance
Genadz Korshunau
Made on